What is the cheapest energy? The energy that is not used!

Solar generation of electricity is a means to meet a portion or all of one’s energy needs, in a decentralized way, whether or not one is connected to the utility grid.

In the specific case of solar photovoltaics (PV), this involves the direct transformation of the sun’s rays into electricity. It is an inexhaustible source of energy, reliable, clean, silent, decentralized and accessible everywhere.

HOW DOES IT WORK? 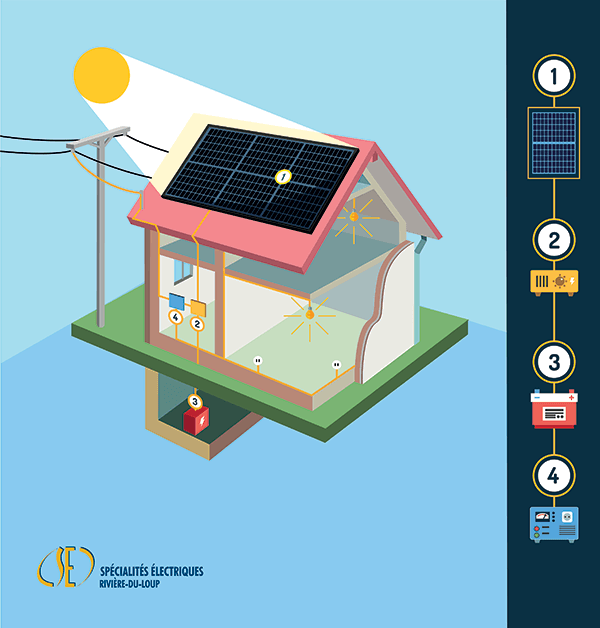 PHOTOVOLTAIC PANEL
Small photovoltaic cells (solar batteries), connected to each other, absorb the energy from the sun’s rays and transform it into electrical current. The component responsible for the photovoltaic effect is a semi-conductor; silicon is mostly used.

CHARGE CONTROLLER
By a regulatory mechanism that constantly monitors the status of the battery, the charge controller allows for the charging of the battery while preventing the risk of overcharge.

SOLAR BATTERY
The battery is used to store the energy produced by the photovoltaic panels. The solar battery supports, over a long period, successive charge and discharge cycles, in contrast to the starter battery (car battery).

INVERTER
The inverter transforms the continuous current of photovoltaic energy into alternating current in order to operate the electrical appliances. The inverter can be connected to Hydro-Quebec’s electricity network into which the energy produced is deposited – to generate revenue - or be used in a stand-alone system; the energy is then stored in the solar batteries for later use. Other sources of production (wind energy, micro-hydropower, etc.) can be used in combination with the solar photovoltaic panels.

SYSTEMS CONNECTED TO THE UTILITY GRID

The energy produced, very close to the areas where electricity is used, is injected into the public grid. A meter calculates the net balance of consumption and production. The excess energy produced is credited by Hydro-Quebec, from which the client is supplied with electricity on an as needs basis.

This version is especially popular for homes far from the public service for which the connection would be too expensive. In these systems, the energy produced is stored in accumulators that fuel the appliances of the home even when there is no sunshine.

Is the sunshine we receive in Quebec adequate? Absolutely! The province is so sunny that its potential is in fact 40% higher than in Germany, which held the world record in 2011 for its installation of photovoltaic systems.

Solar energy could have its rightful place in Quebec. However, lack of adequate subsidies makes photovoltaic technology expensive (between 38 and 46 cents per kWh). Even if it is super efficient, only those who truly believe in the technology or those who choose to live off-the-grid have it installed.

Still convinced about generating your own electricity? If so, you can also turn to wind energy or even to micro-hydropower. The electricity produced by a wind turbine can be used for heating or for operating small electrical appliances. Domestic wind turbines cannot usually meet the needs of a home, which will require additional power. As far as micro-hydropower is concerned, it can also provide a portion of the electricity consumed in a dwelling, without being used as the only source of energy.. 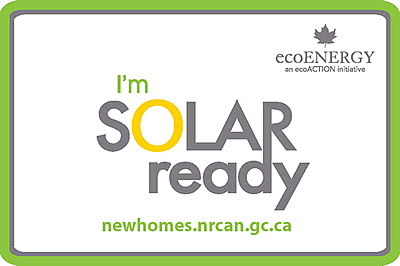 The ERE 132 home is ready for solar: it can accommodate a collection system for solar energy. When the solar panel technology (thermal or photovoltaic) becomes more financially attractive, in the next few years, then its installation will be considerably less costly. You can also be "solar ready". How? During the construction of your home, very simple measures can be undertaken: